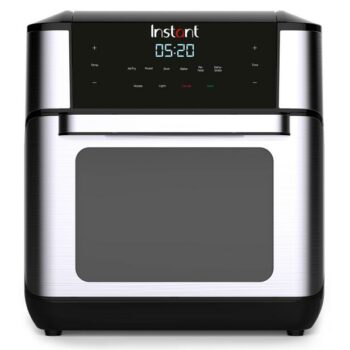 Air fryers have surpassed the Instant Pot as the latest kitchen craze. So perhaps it comes as no surprise that Instant Brands, the parent company of the official Instant Pot, is getting in on the air-frying game with the all-new Instant Vortex Plus 7-in-1 Air Fryer Oven. And it’s available exclusively at Walmart.

Like its Instant Pot models, Instant Brands has built the Instant Vortex Plus with versatility in mind. It’s got seven different presets: Air Fry, Roast, Broil, Bake, Reheat, Dehydrate and Rotate “for rotisserie-style cooking.” It’s got a 10 quart capacity, which rivals many air fryers on the market, which tend to max out around 5. And, if the inventors if the Instant Pot learned anything, it’s that their fans love accessories. The Instant Vortex Plus include a drip pan, two cooking trays, rotisserie spit and forks, a rotisserie basket and a rotisserie fetch tool.

One thing to really think about before you purchase? The size. The Instant Vortex Plus is more than a foot in any direction and weights a whopping 16.6 pounds. This isn’t an appliance you’ll want to be moving around frequently. That said, it has the capacity to cook for up to six people at a time when using both cooking trays and has enough room for a 4-pound chicken, according to the product description. That’s dinner for the whole family on the table without preheating your oven.

Finally, the price. At $99, the Instant Vortex Plus is cheaper than many other air fryers of its size on the market. It’s only available at Walmart, so we suggest snagging one before they’re gone.

This site uses Akismet to reduce spam. Learn how your comment data is processed.